DRD1 - A New Target in the Battle Against the Age-related Decline in Neurogenesis?

Dopamine receptors help to regulate emotion, locomotor activity, learning, and memory [1, 2], with the dopamine D1 receptor (DRD1) abundantly expressed in neurogenic areas [3]. Evidence has suggested a role for constitutive DRD1 activity in the development of the embryonic brain [4], although the physiological significance of DRD1 activity remains unclear [5]. Researchers led by Gang Pei (University of Chinese Academy of Sciences, Shanghai, China) now report a link between constitutive DRD1 expression, human neural stem cell (NSC) proliferation and stemness, and the formation of human cerebral organoids in their new STEM CELLS article [6]. Overall, this fascinating new study establishes a crucial role for constitutive DRD1 activity in the regulation of neurogenesis during brain development and suggests a novel means to battle the loss of NSC activity associated with increasing age and neurodegenerative diseases.

After confirming the elevated levels of DRD1 expression in human NSCs, Wang et al. studied the consequence of inhibiting DRD1 activity using an inverse DRD1 agonist, short hairpin RNA, and a CRISPR‐Cas9-mediated knock-in mutation; interestingly, DRD1 loss prompted the proliferation of human NSCs but impeded their differentiation, thereby suggesting that NSCs became locked into a stem cell-like state. The authors then moved their analysis to human cerebral organoids, where they established that the inhibition of DRD1 activity and the increase in NSC proliferation and the maintenance of a stem-like state induced cerebral organoids expansion and folding and hindered cortical neurogenesis.

Mechanistically, the authors established that the enhanced self-renewal and inhibited differentiation of NSCs following DRD1 inhibition occurred through a reduction in the phosphorylation of the CREB-binding protein (CBP) histone acetyltransferase by protein kinase C (PKC). The altered activity of this cofactor may then influence the methylation and acetylation status of lysine 27 histone H3, thereby inducing alterations to the transcriptional profiles of NSCs.

Overall, the authors provide evidence that constitutive activity of DRD1 in NSCs permits ongoing neurogenesis and controls the cortical development in human cerebral organoids; however, their findings also point to the inhibition of DRD1 activity as a potential means to amplify the NSC pool and thereby negate the age‐related decline in hippocampal NSC activity and the associated cognitive and affective defects.

For more on the mechanisms that control the stem cell characteristics of NSCs and means to fight the aging process in the neurogenic regions of the brain, stay tuned to the Stem Cells Portal! 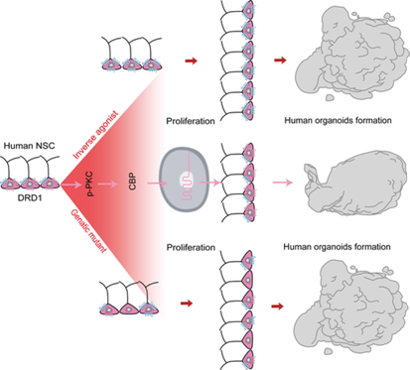