This new report provides proof‐of‐concept to the hypothesis of mitochondrial transfer from EPCs and brain endothelial cells, and the authors now hope to discover the intracellular signals that link upstream mitochondrial incorporation to downstream regulation of endothelial function. However, they do note certain caveats to their study, including the unknown nature of the EPC mitochondrial release‐uptake mechanism, the possible influence of exosomes and microvesicles as part of the conditioned medium particles, and the possible involvement of other important brain cell types, such as pericytes.

For more on the fascinating topic of stem cell-derived extracellular mitochondria and their potential as a new means to promote recovery from stroke, stay tuned to the Stem Cells Portal! 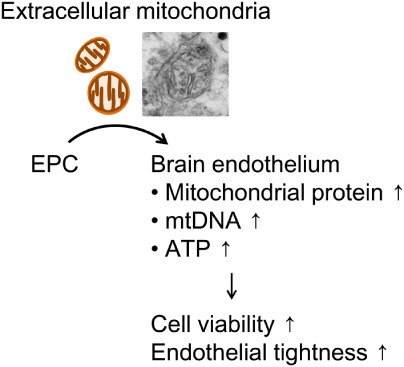