KAZAN (RU), November 2021 — Tay-Sachs disease is one of the orphan diseases currently focused on by many research groups worldwide. This disorder occurs due to gene mutations in one of the lysosomal enzymes (β-hexosaminidase A), leading to the accumulation of specific lipids (GM2 gangliosides) in the cells of the nervous system. The disease is characterized by progressive neurodegeneration, leading to disability and subsequent death. Currently, there are no drugs that can cure it.

Scientists at Kazan Federal University have investigated the effects of curcumin and cord blood cell transplantation in Tay-Sachs disease. Cord blood cell transplantation is often used in lysosomal storage diseases to increase the level of functionally active enzymes, since donors do not have mutations in the β-hexosaminidase A gene. Transplanting cells that synthesize a working enzyme can prevent further progression of the disease, thereby prolonging the life of patients.

Curcumin is a dietary supplement beneficial for its anti-inflammatory and antioxidant properties in many neurodegenerative diseases. According to scientists, therapy combining these approaches can relieve symptoms of the disease and improve the condition of patients.

The researchers have shown that after transplantation of umbilical cord blood cells in the patient’s plasma, the concentration of the missing enzyme increases. This effect is achieved due to the fact that the umbilical cord blood contains stem cells, which are the source of normal enzymes. In addition, both curcumin intake and transplantation resulted in a decrease in inflammation, which was confirmed by measuring the level of inflammatory cytokines in the patient’s blood plasma.

“Tay-Sachs disease is associated with severe neurodegeneration and neuroinflammation. An increase in the level of inflammatory cytokines leads to the migration of activated microglia and astrogliosis, which is characteristic of gangliosidosis. Umbilical cord blood is rich in hematopoietic stem cells that have immunoregulatory properties. Also, donor cord blood cells produce a normal enzyme. Therefore, transplantation can lead to suppression of the inflammatory response and reduce the amount of accumulated GM2 gangliosides,” said the study’s co-author, Albert Rizvanov, Ph.D., Dr.Sci., professor, chief researcher and director of KFU’s Clinical Research Center for Precision and Regenerative medicine.

Valeriya Solovyeva, Ph.D., head of the genomic and cell engineering group at Gene and Cell Technologies Lab, explained that curcumin at the molecular level affects various processes in the human body. In particular, it is able to suppress inflammatory responses by lowering the level of inflammatory cytokines and has a beneficial effect on the course of neurodegenerative diseases, which has been confirmed by many clinical studies. However, the molecular mechanisms of the effect of curcumin on the body of patients with Tay-Sachs disease have not been studied.

Importantly, the described approach is not a clinical recommendation because the paper only covers a single case report. Clinical trials are needed to support the takeaways from the research. 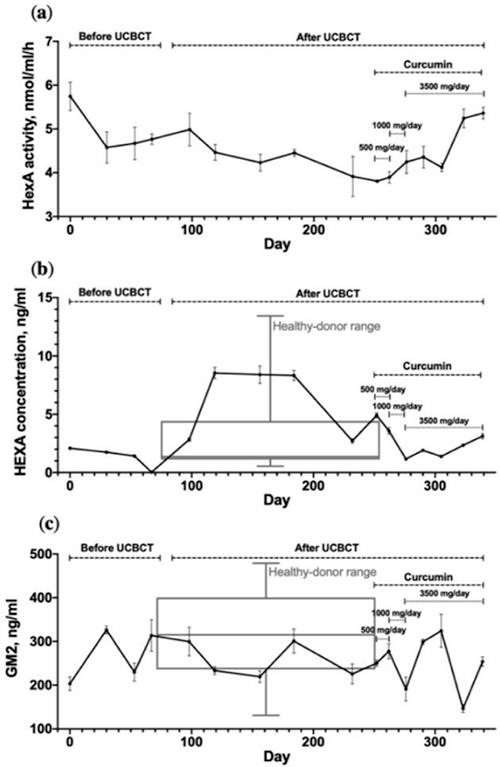