LOS ANGELES, CA (US), June 2021 — The promotion and marketing of unproven stem cell therapies is a global problem that needs a global solution, say experts in a perspective published June 8 in Stem Cell Reports. The authors of the paper call for the World Health Organization (WHO) to establish an advisory committee on regenerative medicine to tackle this issue and provide guidance for countries around the world.

"The field of regenerative medicine, which entails the manipulation of cells and tissues to obtain therapeutic properties, has been hailed as the most promising research field in modern medicine," said senior author Mohamed Abou-el-Enein, M.D., Ph.D., the executive director of the joint University of Southern California/Children's Hospital of Los Angeles Cell Therapy Program. "Starting in the early 2000s, however, unregulated stem cell clinics offering untested and poorly characterized treatments with insufficient information on their safety and efficacy began emerging all over the world, taking advantage of the media hype around stem cells and patients' hope and desperation."

"Advancing regenerative medicine is key to addressing the chronic disease burden, which the WHO considers to be a top international priority," said first author Zubin Master, Ph.D., an associate professor of biomedical ethics at the Mayo Clinic. "And even though we have had significant advancement in the field of regenerative medicine, more needs to be done to ensure the safe and timely delivery of evidence-based interventions to patients, many of whom have exhausted all available options."

Kirstin R.W. Matthews, Ph.D., at Rice University’s Baker Institute for Public Policy, also contributed to the commentary. All three authors are Lawrence Goldstein Science Policy Fellows for the International Society for Stem Cell Research (ISSCR) and ex-officio members of ISSCR's Public Policy Committee. They decided to write it after realizing that the majority of efforts in this space have focused on the marketing practices of providers and clinics, with much less focus on the tightening of regulations and enforcement to deal with the issue from a global standpoint.

The authors write that the WHO, which already has established an expert advisory committee to develop global standards for governance and oversight of human genome editing, could initiate a similar committee to address the spread of unproven stem cell treatments. They say that the committee could promote greater harmonization among regulatory standards, convince member nations to prioritize this issue on their public health agendas, and develop educational and outreach tools that could help increase awareness among physicians and patients on the danger of this practice.

"I believe that the global spread of unproven stem cell therapies reflects critical gaps in the international system for responding to health crises, which could put the life of thousands of patients in danger," Dr. Abou-el-Enein sais. "Urgent measures are needed to enhance the global regulatory capacity to detect and respond to this eminent crisis rapidly."

The authors also propose the establishment of an active surveillance mechanism to collect and analyze information on dubious clinics performing these procedures and share it with the public to increase awareness, as well as taking the appropriate legal actions. They note the importance of educational programs for patients and physicians on the realistic potential of stem cells and the regulatory pathways that are in place for developing these promising therapies.

LA JOLLA, CA (US), June 2021 — Type 1 diabetes, which arises when the pancreas doesn’t create enough insulin to control levels of glucose in the blood, is a disease that currently has no cure and is difficult for most patients to manage. Scientists at the Salk Institute are developing a promising approach for treating it: using stem cells to create insulin-producing cells (called beta cells) that could replace nonfunctional pancreatic cells.

In a study published June 7 in Nature Communications, the investigators reported that they have developed a new way to create beta cells that is much more efficient than previous methods. Additionally, when these beta cells were tested in a mouse model of type 1 diabetes, the animals’ blood sugar was brought under control within about two weeks.

In the current work, the investigators started with human pluripotent stem cells (hPSCs). These cells, which can be derived from adult tissues (most often the skin), have the potential to become any kind of cell found in the adult body. Using various growth factors and chemicals, the investigators coaxed hPSCs into beta cells in a stepwise fashion that mimicked pancreatic development.

Producing beta cells from hPSCs in the lab is not new, but in the past the yields of these precious cells have been low. With existing methods, only about 10 to 40 percent of cells become beta cells. By comparison, techniques used to create nerve cells from hPSCs have yields of about 80 percent. Another issue is that if undifferentiated cells are left in the mix, they could eventually turn into another kind cell that would be unwanted.

“In order for beta cell-based treatments to eventually become a viable option for patients, it’s important to make these cells easier to manufacture,” said co-first author Haisong Liu, Ph.D., a former member of the Belmonte lab. “We need to find a way to optimize the process.”

They also looked at the ways in which these cells are grown in the lab. “Normally cells are grown on a flat plate, but we allowed them to grow in three dimensions,” said co-first author Ronghui Li, a postdoctoral fellow in the Belmonte lab. Growing the cells in this way creates more shared surface area between the cells and allows them to influence each other, just as they would during human development.

After the cells were created, they were transplanted into a mouse model of type 1 diabetes. The model mice had a modified immune system that would not reject transplanted human cells.

“We found that within two weeks these mice had a reduction of their high blood sugar level into normal range,” said co-first author Hsin-Kai Liao, Ph.D., a staff researcher in the Belmonte lab. “The transplanted hPSC-derived beta cells were biologically functional.”

The researchers will continue to study this technique in the lab to further optimize the production of beta cells. More research is needed to assess safety issues before clinical trials can be initiated in humans. The investigators say the methods reported in this paper may also be useful for developing specialized cells to treat other diseases. 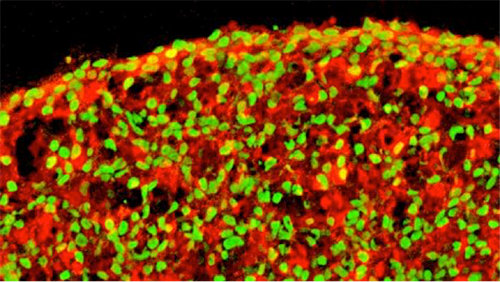