A New Way to Study HIV’s Impact on the Brain

PHILADELPHIA, PA (US), March 2020 — Though many negative repercussions of human immunodeficiency virus infection can be mitigated with the use of antiretroviral therapy (ART), one area where medical advances haven’t made as much progress is in the reduction of cognitive impacts. Half of HIV patients have HIV-associated neurocognitive disorders (HAND), which can manifest in a variety of ways, from forgetfulness and confusion to behavior changes and motor deficiencies.

To better understand the mechanisms underlying HAND, researchers from Penn’s School of Dental Medicine and Perelman School of Medicine and from the Children’s Hospital of Philadelphia (CHOP) brought together their complementary expertise to create a laboratory model system using three of the types of brain cells thought to be involved. Led by Sean Dr. Ryan, Ph.D., who was co-mentored by Kelly Jordan-Sciutto, Ph.D., of Penn Dental Medicine and Stewart Anderson, M.D., of CHOP and Penn Medicine, the model recapitulates important features of how HIV infection and ART affect the brain.

“Frankly the models we generally use in the HIV field have a lot of weaknesses,” said Dr. Jordan-Sciutto, co-corresponding author on the paper, which appears in Stem Cell Reports. “The power of this system is it allows us to look at the interaction between different cell types of human origin in a way that is more relevant to patients than other models.”

In addition to studying HIV, members of the team plan to use the same model to shed light on the neurological mechanisms that underlie other conditions such as schizophrenia, Alzheimer’s and even normal aging.

“We’re collaborating with a variety of colleagues to use this system to study Alzheimer’s disease as well as schizophrenia,” said Dr. Anderson, co-corresponding author on the paper. “We have the components in a dish that we know are interacting in these diseases, and this gives us a new mix-and-match way to understand how certain cells are contributing to neuronal damage.”

Indeed, the impetus to create the model grew not out of HIV research but work that Dr. Ryan was pursuing in Anderson’s lab on schizophrenia.

“We had been looking at the role of microglia, the resident immune cells of the central nervous system,” said Dr. Ryan, first author on the work. “We wanted to see if we could see the mechanistic changes that occur with microglia in schizophrenia.”

To do so, Dr. Ryan and Dr. Anderson were interested in using human-induced pluripotent stem cells — adult cells that are reprogrammed to resemble embryonic stem cells — which can be coaxed into differentiating into a variety of different cell types.

But schizophrenia is a complicated disease with a variety of contributing genetic and environmental factors and a broad spectrum of presentations. Rather than looking at something complex, they sought to apply their new system to a disease that likewise causes neurological damage but does so in a more dramatic way and in which microglia are also implicated: HIV/AIDS infection.

They reached out to Dr. Jordan-Sciutto, who has deep experience investigating the mechanisms of HAND and was eager for the opportunity to develop a model superior to those currently available. Together, the scientists identified the three cell types they were most interested in studying: neurons, astrocytes and microglia.

Neurons aren’t directly infected by HIV but are known to be damaged during infection. Meanwhile astrocytes are believed to interact with neurons, causing damage by sending pro-inflammatory factors into the spaces between cells, called synapses. And microglia, which are responsible for maintaining a healthy environment in the absence of disease, are seen to expand and contribute to inflammation during HIV infection.

After nailing the technical challenge of creating this tractable model in which each cell type is generated independently and then mixed together, the team used it to probe how HIV infection and ART impact the cells, both alone and in combination.

“A lot of people are taking PreEP (pre-exposure prophylaxis) if they’re in a situation where their risk of contracting HIV is heightened,” said Dr. Ryan. “Just as we want to understand the cognitive impacts of HIV, we also want to see whether these drugs alone are impacting the brain health of otherwise healthy people.”

The researchers looked at RNA expression in their cultures to get a sense of what proteins and signaling pathways were becoming activated in each scenario. During infection, they saw inflammatory pathways that had previously been implicated in HIV in earlier research. When they introduced the antiretroviral drug EFZ, which is not in common use in the United States but remains a frontline therapy in many other areas of the world, with an infection, the activity of most of these pathways was reduced.

“But this scenario involved its own unique response,” Dr. Ryan said. Certain pathways associated with inflammation and damage remained despite the introduction of EFZ.

“EFZ treatment of the tricultures that included HIV-infected microglia reduces inflammation by around 70 percent,” Dr. Ryan said. Interestingly, EFZ by itself also triggered inflammation, though to a lesser extent than infection.

“It seems a combination of infection and ART is creating its own unique response that is different from the sum of its parts,” Dr. Ryan said. “Knowing what pathways are still active due to ART could help us appropriately target additional therapies so patients don’t develop HAND.”

Many features of infection seen in the three-cell culture mirror what is known from HIV infection and ART treatment in people, giving the researchers confidence in the reliability of their model.

“Just looking at the microglia,” said Dr. Anderson, “we see in our system that they are taking on both of their normal roles in keeping key signaling systems balanced during their normal state and activating and causing damage when they’re fighting infection. We’re able to model normality and abnormality in a way we haven’t been able to before.”

For Dr. Jordan-Sciutto, the new system “is really going to change the way my lab operates going into the future.” She’s hopeful many other HIV scientists will take it up to further their studies as she also explores more aspects of HIV’s impact on the brain, such as how it navigates through the blood-brain barrier that normally protects the central nervous system from inflammation and infection. 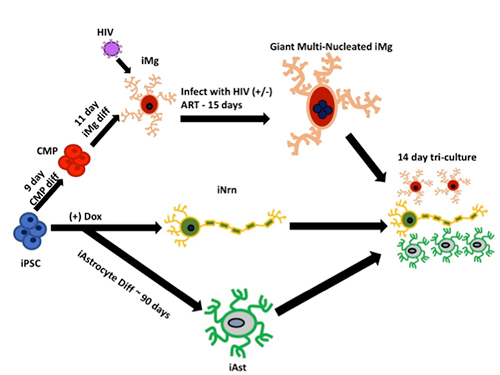 Infecting microglia with HIV, then adding those cells to astrocytes and neurons, the team discovered the model system recapitulated key features of the damage seen in the brain during HIV infection, with or without antiretroviral therapy. Image courtesy of Sean Ryan.