KANSAS CITY, MO (US), September 2021 — People who fish and regularly use earthworms as bait may be familiar with the animal’s ability to regenerate a head or tail when cut in two. Yet while impressive, an earthworm’s regenerative capacity is child’s play compared with that of the planarian Schmidtea mediterranea. This species, a type of flatworm, can regrow an entire animal from tiny tissue fragments as minuscule as 1/279th of the animal.

How does this happen? What cell types contribute to this astounding regenerative capacity? Besides stem cells, which are obviously important, how many other cell types are important for regulating this process, and what do they do?

Recent research published in Nature Cell Biology by members of the Sánchez Alvarado Lab at the Stowers Institute for Medical Research provides some early answers to these complex questions.

“It was already known that the wound-induced epidermis and the wound-induced muscle played different roles in regeneration, but we wanted to understand the big picture,” explained lead author Blair Benham-Pyle, a postdoctoral scientist in the lab of Stowers Institute executive director and chief scientific officer and Howard Hughes Medical Institute investigator Alejandro Sánchez Alvarado, Ph.D.

“This is the first study that definitively found that all three germ layers (muscle, epidermis, and intestine) of Schmidtea mediterranea transcriptionally respond to amputation, and that both tissues near the wound site and far away from the wound site are contributing to regenerative capacity,” said Dr. Benham-Pyle.

“Regeneration was a little bit of a black box before – we knew some genes that were important, and we could look at how some genes were altered globally in response to amputation and during regeneration, but we didn’t know how individual cell types across the animal were changing their behavior or function. That’s what this experiment allowed us to characterize.”

“The dream experiment,” as described by Dr. Benham-Pyle – and what they ultimately accomplished – was to “characterize gene expression on the single-cell level, across all of the different cell types of a regenerating animal over time.”

At first, the researchers considered doing the experiment using large-scale RNA sequencing because droplet-based single-cell sequencing – where every single cell is encapsulated in a lipid droplet with a barcode, and then lysed to label all mRNAs with that barcode – was not feasible at the scale needed for this experiment. But in early 2017, Dr. Sánchez Alvarado came across a preprint that had just been posted to bioRxiv reporting a new single-cell sequencing method named SplitSeq. Once Dr. Benham-Pyle had reviewed and discussed with Dr. Sánchez Alvarado the merits of the work in the preprint, they decided to give it a go. After several tries, a number of optimizations, and troubleshooting with the molecular biology and cytometry technology center teams, Dr. Benham-Pyle succeeded in bringing a new single-cell sequencing technology to the Stowers Institute.

After getting it to work, Dr. Benham-Pyle and colleagues captured almost 300,000 single cell transcriptomes across eight different tissues and the stem cell compartment in animals that had lost the ability to regenerate, compared with those that were capable of regenerating.

“This allowed us to look at all of the different cell types across the entire animal to see which responded to amputation and what genes were marking these cells as they changed and responded to regeneration,” explained Dr. Benham-Pyle.

The researchers found and characterized five different cell types from all three germ layers that transiently altered their transcriptional output after amputation. When genes enriched in these cell types were knocked down, said Dr. Benham-Pyle, “We found that all of them contribute to regeneration in different ways, being activated at different times and in different parts of the body.”

Some of their findings were more unexpected than others. For example, the fact that muscle is important for patterning and that the epidermis is important for early stem cell proliferation bursts during regeneration was not as unexpected. The researchers were surprised, however, to discover rare cells – states induced during whole-body regeneration – called transient regeneration-activating cell states (TRACS), and to find that the intestine seems to be important for both stem cell maintenance and regulating tissue remodeling after amputation.

“I didn’t expect the intestine to globally change its output and remodel its function after injury,” Dr. Benham-Pyle said. “But if you think about it, it does make sense. The planarian normally grows its body plan based on its nutrient environment. The worm eats, and that fuels a burst of stem cell proliferation and the addition of new biomass. When you cut the animal, especially in extreme injury, it often loses its ability to eat. All of the growth and remodeling now needs to be fueled by nutrients already existing within the body plan. So, after amputation, the intestine alters its function to scavenge material from dying cells within the animal, and to convert those materials into new healthy cells in a regenerated worm.”

Taking a step back, “What this paper does is take a global look at what sorts of cells need to be in a signaling environment to stimulate stem cells to create new tissue and replace missing tissue,” Dr. Benham-Pyle said.

“It turns out that a number of genes that we characterized, for instance in the intestine, have also been implicated in immune evasion in the context of cancer or in wound healing. A lot of the same mechanisms that stem cells use to avoid the immune system and to fuel proliferation and growth during regeneration may be the same mechanisms that are co-opted by tumors.

“By understanding what non-stem cell states and tissue types are helping to create that signaling environment, we might eventually find new targets for either stimulating healthy and normal wound healing in contexts where regenerative capacity is limited, or, limiting growth capacities of things that we don’t want to grow, like tumors.”

“Now that we have a map, we can go and figure out how the cells are talking to each other, what they’re doing, and how they’re doing it.” 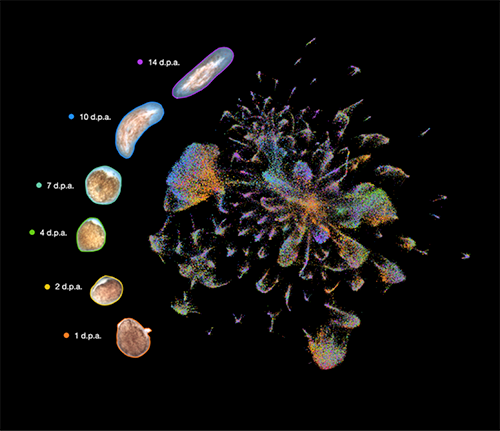